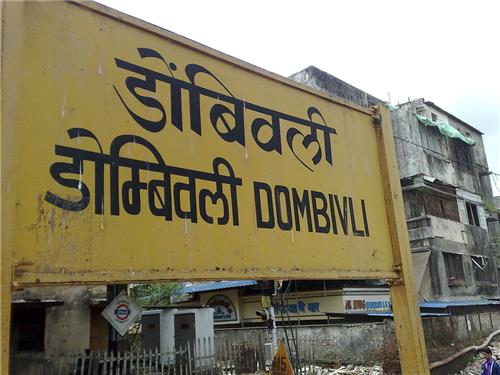 Dombivli is a town in Kalyan Tehsil of Maharashtra which lies at a distance of about 20 kilometers from Thane and around 6 kilometers from Kalyan. This town is a thickly populated suburb of Mumbai with a total population of about 11, 93,000. Most of the residents of Dombivli are literate and the place is the first literate town in Maharashtra and the second one in India. The town is a small and cultural one with majority of population following Hinduism.

Dombivli is an important industrial area of the state having an industrial zone lying on the eastern side of the Mumbai highway. A number of eminent literians, musicians, actors, authors and dramacists are residing in the city.

Dombivli Town came into being as Gajabandhan village. The old Dombivli forms west flank and is embraced by Ulhas river. The east flank is the arm of the Municipal Corporation and a major part of the budget is used for its development.

History of this town is dated to the medieval period while there are still no major evidences of the early habitation of Dombivli. This town was first documented on stone inscriptions in the year 1075 by Harpal Dev. These inscriptions are situated at Mahul village located near the port Turbhe. These stone writings in Dombivli refer to its existence in the year 1396 – 97.

Dombivli is honoured as the first ever fully literate town of Asia but has been taken over by a town in Kerala. There are several schools in the town which offer for Primary and Secondary education to the children. Most of these are affiliated to the University of Mumbai. Also, there are several colleges offering technical education to students. A couple of these are affiliated to the Board of Technical Education, Mumbai.

Not only this, but Dombivali has also not remained away from the boom in the computer software. A number of institutes have been opened in the city offering youth with the diplomas in the computer applications. Several short term courses are also available with these private institutes. This town gives a great contribution to the technical education in the field of Information Technology.

Dombivli is a part of Dombivli – Kalyan Municipal Corporation in Mumbai in the state of Maharashtra. These twin cities are located at a distance of about 7 kms from each other. As the city is well connected by the local trains a number of tourists visit it every year. Visitors often come to enjoy the exotic beauty offered by the beaches and picnic spots in the town. Also, there are a number of Temples, Churches, Mosques etc located in the city which are often visited by devotees from across the state.

Dombivli is well connected to Mumbai and various surrounding regions via various modes of transport. Visitors can easily reach the town by railway, bus, rickshaw or taxi. The railway station of Dombivli has been set up in the year 1887. Initially, there was only one cabin that was used for ticketing as well as for signaling. Also, the railway tickets were firstly stamped as “Dimali” but efforts were made to rename the station as “Subhash Nagar”. The Chhatrapati Shivaji International Airport is the nearest airport to Dombivli lying at Mumbai.

Shopping in Dombivli is really fun and one can see everything available by walking across the street. You can walk to get electronics items, fashion accessories, apparels, music instruments form the town itself. A number of supermarkets, departmental stores, general stores, markets, malls, bazaars etc have made the life for the residents of Dombivli quite easy.

Dombivli is a well known commercial place located in the state of Maharashtra. Maharashtra Industrial Development Corporation is a big industrial complex which has been developed around Dombivli. It is a well known place for its rapid industrial growth having major industries such as dye’s, paints, chemical and heavy metal factories. Some of the popular industries of Dombivli include Vicco Labs, Gharda chemicals, Deepak Fertilizers, Llyod Steel etc.

Dombivli is steeped in local culture. A number of churches, mosques, temples can be found in the city located in close proximity to each other. Some of the well known temples in the town include Gaon Devi Mandir, Ganpati Mandir. Several artists can also be found in the town with many people with interest in music, dance, drama, theater etc. Residents of the town celebrate a number of festivals with great enthusiasm. Navavarsha Swagat Yatra is the most prominent one out of these festivals, which is celebrated on the first day of the Hindu New Year.